Oil has been pouring into the Gulf from a blown-out undersea well at a rate of about 210,000 gallons per day since April 20, 2010. The slick threatens the U.S. coastline.

On May 7, 2010, the oil slick reached several barrier islands off of Louisiana’s coast. Recent satellite images show oil from the spill in the Gulf of Mexico is extending west around the Mississippi Delta. On May 6, the National Oceanic and Atmospheric Administration released their latest map of the approximate oil locations in the Gulf of Mexico. 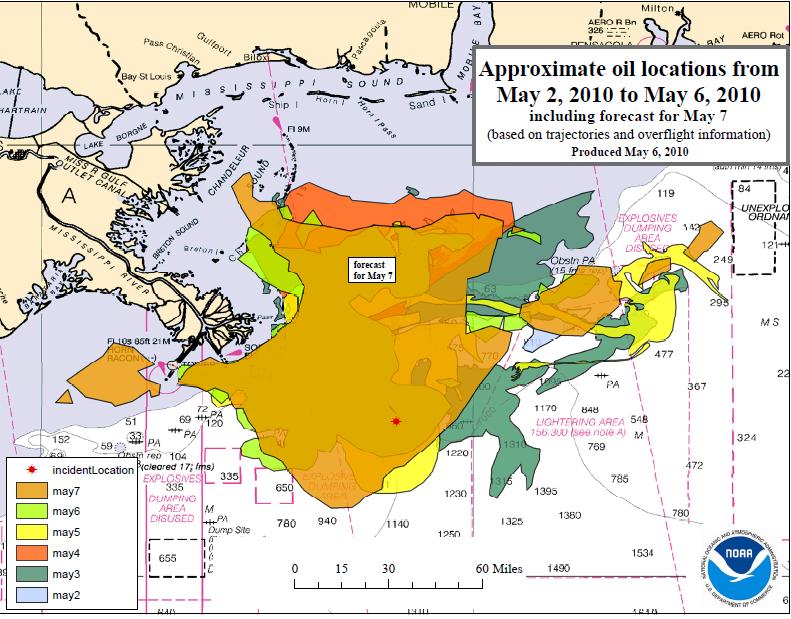 Residents of Louisiana, Mississippi, Alabama and Florida anxiously await more news of the approaching oil, as their lives grind to an uneasy halt.

The oil spill could force closure of the Louisiana Offshore Oil Port, authorities announced on May 7th. The port, known as LOOP, is one of the leading facilities for imported oil, handling up to 1.2 million barrels a day and feeding half the nation’s refinery capacity. The tourism industry in the northern Gulf worry that a lifestyle, not just wildlife and dollars, is in peril.

The fishing industry has been the fastest and hardest hit industry. Federal officials have expanded off-limits fishing area in the northern gulf, and thousands of fisherman wait for more news. NOAA spokeswoman Christine Patrick said the initial closure was 6,814 square miles and the new area is 10,807 square miles. Louisiana officials closed shrimping in state waters from South Pass of the Mississippi to the eastern shore of Four Bayous Pass just east of Grand Isle. Earlier, state waters east of the Mississippi were closed to seafood harvesting.

State and federal authorities are preparing to deal with a variety of hazards to human health if and when the full brunt of the toxic mess washes ashore. While waiting to see how bad things will get, public health agencies are monitoring air quality, drinking water supplies and seafood processing plants and advising people to take precautions. Little if any oil has reached land thus far, but shifts in wind speed and direction could propel the slick toward populated areas.

Since its establishment in 1999, Seeger Weiss has led some of the most complex and high-profile litigations in the U.S.